As you may be aware, both Apple and Google’s Android have recently released new versions of their mobile operating systems. Apple’s iOS 9 was introduced to users in conjunction with the new iPhone 6s in mid-September; Android’s 6.0, known as Marshmallow, was released last week.

The platforms have been available to our app developers for some time now so they’ve had a chance to see what works well, and what not so well, moving forward from iOS 8 to iOS 9 and Android L to M.

Since the release of iOS 9 there has been a wide adoption of the platform, currently sitting at 57% but continuously increasing with strong sales from the iPhone 6S and 6S Plus. The unprecedented speed of adoption by iOS users has huge implications in the app development world in that developers must ensure they fix any possible ‘breaks’ and crashing issues with current iOS 8 apps that iOS 9 will have compatibility issues with. 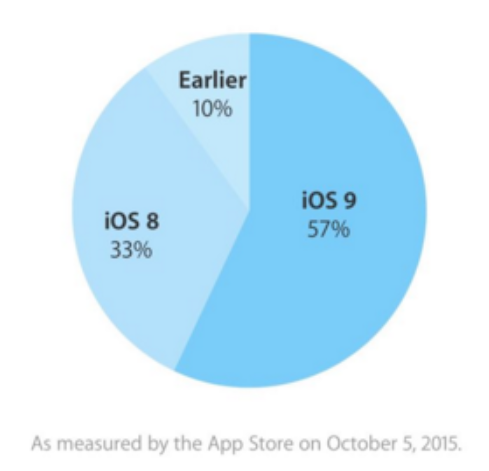 With Android Marshmallow only being released on the 8th October adoption of Android Marshmallow is still in its infancy, however Google Nexus recently announced the release of the 5X and 6P devices that will support 6.0 . Large smartphone manufacturers such as Samsung, HTC and Sony are yet to issue their own modified versions of Marshmallow which will drive updates. Looking at the current Android version adoption in the pie chart below, by 2016 we can expect Marshmallow to have around 25% of the Android market share; and with 1.4bn active Android users worldwide that is a considerably large number of users. 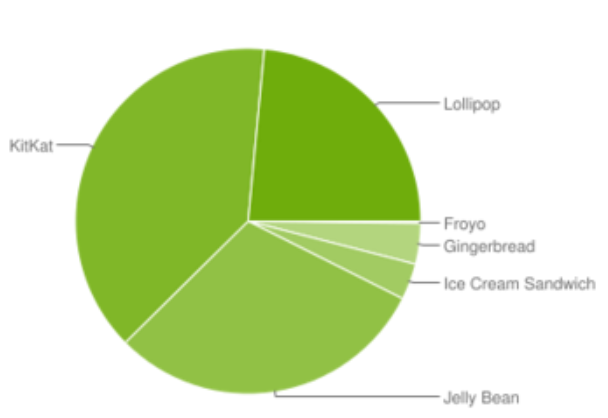 Apple and Google have created a range of new hardware and software functions that have expanded the capabilities of smartphone and tablet apps, something we as app developers find extremely exciting.

As with any update, however, there are a number of considerations needed when dealing with older smartphone apps as we make the progression to iOS 9 and Android 6.0. Apple has ceased security fixes and other support of iOS 7 and any previous platform, and The Distance will follow this. Similarly, with 96% of Android users on version 4.0.3 and above, The Distance will no longer support any Android version before this.

With these changes we have carried out an internal audit of our current app development projects. The various audits are broken down into three key areas

In order organisation’s apps to support iOS 9 and Android 6.0 there are a number of fixes and updates we must make. These fixes are fundamental in order for the apps to avoid breaking, crashing and to provide the best possible user experience.

iOS 9: Apple will no longer support non secure HTTP links with the App Transport Security update; only HTTPS is supported and is on by default on iOS 9.

Android 6.0: Deprecated libraries like Apache HTTP; and to cope with some features which have changed, such as the updated permissions model.

For The Distance to continue app development work with your organisation in the future we must build a solid foundation on basic iOS 9 and Android 6.0 updated features. This will ensure any future app development projects can be implemented efficiently without a large redesign.

iOS 9: When selecting web links, iOS 9 provides a new feature using an in-app Safari browser to keep users in the app rather than redirecting them to an external browser.

Android 6.0: Possibility to to develop apps with doze and standby capabilities, a new feature of Android Marshmallow to give the user higher performance and battery life from their device.

Apple have introduced some amazing new features on iOS 9 and the new iPhone 6S and the same can be said for Android Marshmallow devices, bringing new dimensions and opportunities to the user experience. Our iOS and Android app developers have been working continuously on new features for the platform updates.

iOS 9: The new multitasking update gives users a split screen view with the ability to use multiple apps simultaneously; bringing with it a new level of task productivity for users.

In light of the recent iOS and Android updates, audits will be available to all clients. The basis of these audits is to look at key changes to each respective new operating system, from a code level to testing key screens. You will receive a document with a comprehensive breakdown of all priority fixes and recommendations and suggestions.

Early adoption of changes in regards to the new platform versions can benefit the longevity and user experience of mobile apps. Interested in updating your app to iOS 9 and Android 6.0? Email us or call Tom on 01904 21 71 71