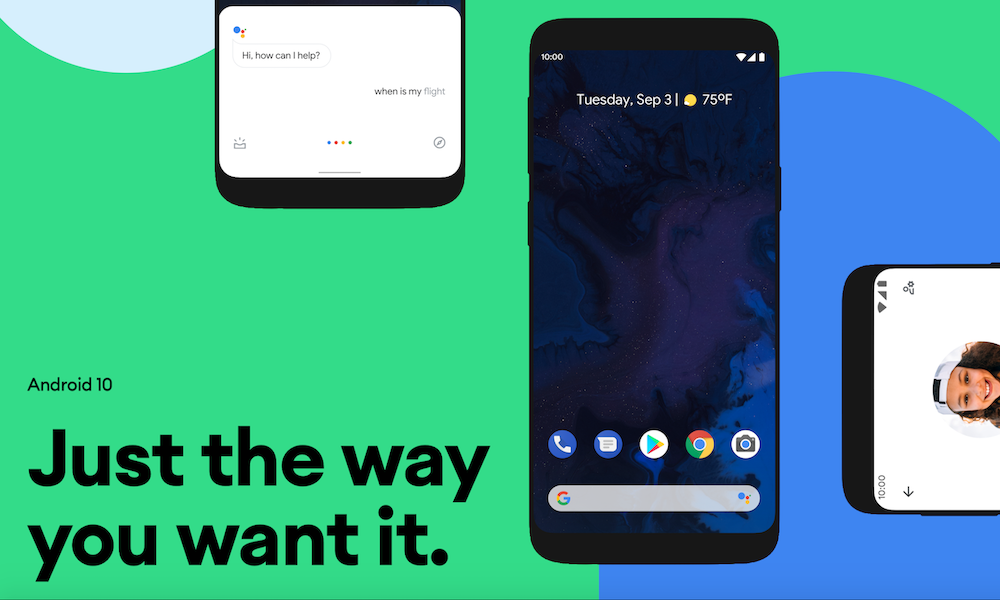 The latest Android operating system has arrived! Or at least, it has arrived on a few devices, namely the Pixel Range and the Essential Phone. If you’re in China or India, you can also get it on the Xiaomi Redmi K20 Pro. Most manufacturers can expect to have it in the next few months. Having dispensed with the sweet-related names of old, Google have named their new operating system Android 10 (or Q). I was secretly hoping that they’d segue into savoury snacks, as Android Quiche has a nice ring to it…

Join the Dark Side

It’s fast becoming the case that every user interface must have a dark mode, lest it risk being seen as anything other than contemporary. Google have clearly taken note and jumped onto the bandwagon. Many apps already have a dark mode, with the majority of Android manufacturers offering their own themes. Google’s dark theme can be enabled all the time, but there is also an option to set a timer.

Apple has often lead the charge when it comes to giving users control over their app privacy settings, but Google are starting to catch up. Android 10 provides users with an array of new features that will grant them control over their privacy. Like Apple, Google have provided users the ability to specify when apps can access device location, be it all the time or only whilst using the app. Android 10 will also prompt users when an unused app is accessing the device’s location so that the user can turn it off.

Google have been kind enough to restructure the settings menu too. It is now much easier to access privacy controls for permissions, location history, account activity and personalised ads. Users will be able to see what data is being collected and prevent it, if they deem it necessary.

With the introduction of almost bezel-less smartphones, the archaic three-button navigation system that Android has clung to for years has a new contender. Android 10 introduces a new form of navigation system that draws many parallels to Apple’s own system that is utilised in the iPhone X series. A single horizontal bar sits at the bottom of the screen, When a user swipes up, they return to home. Swiping up but holding reveals recently opened applications, while swiping to the left or right will navigate through said apps. Visible buttons are, quite rightly, becoming a thing of the past.

Shut Out The Noise

Have A Helping Hand

Google’s Smart Replies are now almost everywhere, having rapidly conquered many more apps. The more you type, the bespoke your replies will become. On-device machine learning ensures that smart replies will present you with responses relevant to you. Another nifty feature is the ability for smart replies to open relevant apps, such as maps for directions, with a simple tap.

Live Caption is another amazing feature that will caption any media that you are consuming, so you can read it as well as listen.

Android 10 is giving users a reason to relax. New security updates and fixes will be released directly from the Play Store. No longer will users have to await a full Android OS update before fixes are deployed; they will now happen immediately. Given that phones are becoming increasingly targeted by hackers and other deviants, knowing that swift turnarounds on security updates are available will alleviate a lot of worries.

What do you think of Android 10? Are there any features that you would have liked to have seen? Let us know by firing an email to hello@thedistance.co.uk we’d love to hear from you!