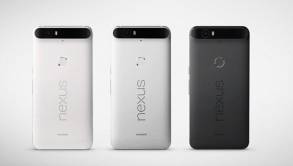 The Google event was primarily centred on two new smartphones; the Nexus 5X and the Nexus 6P that will run on an Android 6.0 Marshmallow OS which was released this week. Another new product unveiled was the Chromecast, with two models available for wireless video and audio streaming. The new features of the smartphones seem to follow the ideas the Mountain View company presented in their Google I/O 2015 event earlier this year

What Google are calling the ‘most premium phone yet’ was designed, as expected, by Chinese manufacturer Huawei. The smartphone is the first all metal body Nexus device available and will retail from £449 for the 32GB model.

The device has a 5.7 inch, high resolution WQMD display with a razor sharp 2560 x 1440 resolution. The camera offerings from the Nexus 6P come in the form of a fantastic 8-megapixel front facing camera for selfie taking, with a 12.3-megapixel rear facing camera that Google claims has incredible image quality. It has fingerprint technology that will be functional with the recent release of Android Pay and a Snapdragon 810 processor with 3GB of ram.

The more affordable option from Google has seen the return of LG as manufacturers in an update of the hugely successful Nexus 5 developed by LG in 2013. The high performing but cheaper model with its molded plastic casing will retail in the UK starting at £339 for the 16GB model.

With a 5.2 inch display, users benefit from a larger screen than the Nexus 5 and an updated 1920 x 1080 display. An impressive feature of the 5x is its camera; with a 12.3-megapixel it matches that of the pricier Nexus 6P but falls short in its 5-megapixel front facing camera. The 5X has also been developed with fingerprint scanning technology for features such as Android Pay, but under the hood it contains a Snapdragon 808 processor and 2GB of ram that doesn’t compete with the specs of the 6P.

A big decider between these two phones is customer screen size preference, as seen with the iPhone 6s and 6s Plus; the price difference is small enough for customers to choose the 6P if they prefer a larger display. With one main feature of both smartphones being the same, the rear facing camera, the real benefit of the 6P over the 5X is a faster and more powerful device, as would be expected from a premium product.

Google also revealed the new Chromecast 2 along with new smartphones. The devices comes in two forms, one for Chrome browser or enabled app streaming, and one for audio named Chromecast Audio; both will be available for the very reasonable price of £30.

The Chromecast plugs into your television’s HDMI port and allows you to ‘Cast’ between your phone/laptop/tablet and television. The device works by connecting to your home network and through Cast-enabled apps on smartphones and tablets meaning you can continue to use your device’s apps while connected to your television. For laptops, the device uses the Chromecast extension allowing you to stream directly from the Chrome browser.

The audio version of the Chromecast works in an identical method to the one for television streaming, but instead plugs into a spare AUX input on a stereo. A great feature of this device is the ability to connect to stereo systems that are ‘off the grid’. Once again it will allow you to continue to use your device as you wish once connected as it works with your home network.

Google event round up

There is a clear message from Google in this event in that they’re stepping up their game with competition  for premium smartphones from the iPhone 6s and Samsung S6; as well as competition from Apple TV and Amazon Fire Stick for TV streaming. The smartphones of 2015 are back to their best for Nexus after the disappoint of the Nexus 6 from 2014 which was premium priced and remained the only option for consumers. The 5X will look to capitalise on the smaller screen and lower budget market; hoping to follow the success of the Nexus 5 from 2013. It is a positive push forward by Google, however, only time will tell if consumers respond positively.

Want to work with us on an app development project? Email us